What Are the Busiest Times at Disney World? 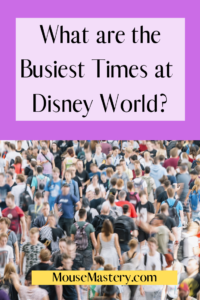 Short answer: these days, EVERY time.

I’m really only half-kidding. When we got married there back in 2012, you could reliably go in most times during January and February and have pockets of days where it was pretty dead. We have yet to experience that again starting around 2015 or so. It was INSANE when we went during that time. We took a somewhat spontaneous trip in August of 2018 and were shocked to find it was about the same crowd as we experienced in January/February times! We definitely notice a difference tied to how the economy is doing.

So basically, anyone who’s been to Disney World the past few years will probably tell you that there’s no such thing as “not crowded.” Frankly, if you see or hear anything promising a certain time of year to be free from crowds, it’s probably a myth or at the very least, wishful thinking. Unfortunately, there is no getting around the fact that besides being considered the “happiest place on earth,” Disney World is also most likely the “most crowded place on earth.”

Disney World’s attractions, food, entertainment, and excellent customer service keep visitors coming back for more year after year despite the crazy amounts of people. The good news is, even with hoards of people flowing into the parks daily, there are still some times of year that boast slightly lower crowd levels than others. Just keep in mind when I say crowds are “low,” it’s relative to the fact there’s always a lot of people there.

Oh, and as for those calendars floating around out there that try to pinpoint the exact least crowded times at Disney World, and the specific days to go to each park? I have found they just aren’t very accurate these days.

The reality is, Disney World always has crowds.

If you can accept the fact that you will rarely experience Disney World without a crowd present, then you can still mitigate that by going when it’s slightly less crowded. So, what are the busiest times at Disney World? The chart below can help you figure out the timing of your Disney vacation. I’ve listed it from busiest to least busiest time:

This chart should give you an idea at a glance about busy days at Disney. When in doubt, always know before you go – it really sucks to plan a vacation and show up to a surprise crowd. It makes everything take longer than you thought to accomplish. Check to see what, if any, special events or competitions are scheduled in Disney World during your planned visit. These events will most certainly boost the crowd level while you are there, and probably drive up hotel prices while driving down availability.

If you’re crowd-averse (totally us),  opt for one of these less crowded (but realistically still crowded) times. Truly, it makes a huge difference in the pace and vibe of your whole trip. I have oodles of other tips for maximizing your time and minimizing crowd, like Extra Magic hours for Disney resort guests, FastPass, apps that monitor wait times, single rider special event tickets are all great ways to experience more in your trip for the same amount of time.

Hopefully, this helps you get the ball rolling with your vacation plans! If there’s anything else you want to know, feel free to contact me, and I’ll be happy to answer any questions you may have! Do you have  go-to time that you swear by? I’d love to hear about it in the comments!