Can You Bring Food Into Disney World? 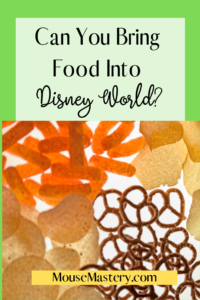 Disney World Has the Fun, but Can You Bring the Food?

Nowadays, food is one thing you won’t have to break the bank on at Disney World – but that wasn’t always the case. Once upon a time, signs greeted visitors at park entrances declaring, “No outside food or drink,” basically requiring visitors to purchase snacks inside of the parks.

This wasn’t a deal breaker for guests, by any means. Disney’s selection of snacks and beverages is massive, and there are more than enough delicious options to satisfy even the pickiest palates. The only real drawback of buying your snacks inside of the parks? The draining effect it can have on your wallet.

People caught on pretty quickly to the fact that those friendly security guards at bag check weren’t particularly concerned if you decided to try and sneak in a granola bar or two. The guards had their focus on more important things, like visitor safety – so outside food found its way through the gates anyway.

Disney changed its policy on food in the parks, and the signs saying, “No, ” were taken down. New signs were put up encouraging guests to bring in their own food and drink.  It was Disney World’s way of saying, “Hey, we care about our guests, and we want you to be 100% satisfied with your visit!” (The subtext here was probably something like, “we know we’re already charging an arm and a leg, and we’ll make money in other ways.”)

Plus, I’m sure the powers-that-be in the Disney universe recognized that they were fighting a losing battle trying to keep outside food on the outside. There was just no way to successfully monitor and enforce the old policy, due mainly to the insane volume of people that passed through the park gates daily.

There’s also the environment we’re in – especially nowadays, there are so many people with unique diet restrictions. Between vegan, gluten-free, vegetarian, food allergies, diabetes and more, there are a lot of people that take special precautions when it comes to what they put into their bodies.

Disney has always stood by their image of excellent customer service, so the fact that you can bring outside food into Disney is, in my opinion, a testament to it.

If you want to bring your own food into Disney World, there are still a few rules in place that need to be mentioned:

So, what’s the best food to bring to Disney World?

You need to think in terms of what’s going to hold up best inside a backpack or fanny pack for hours on end. (Keep the weather and temperature in mind – it’s HOT, there’s lots of direct sun and humidity). Choose things easy and quick to eat, that don’t require heating, and also will give you the energy you need to last through a full day at Disney. (If you’ve been to Disney, then you know it’s intense. It’s almost like you need to train for it like you would a marathon-but it’s so worth it!)

Of course, this isn’t an exhaustive list – but this is a good starting point regarding the food you can bring to Disney! (And, you probably have some personal snack favorites that you will want to include.) If you’re flying, make sure to adhere to any airline regulations regarding food and drink. You can always have stuff delivered once you’re there from Garden Grocer or Instacart.