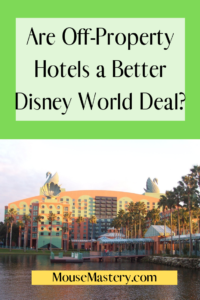 Why choose to stay off-property at Disney World?

For some visitors, they refuse to stay anywhere other than on Disney World property. (🙋) Usually they like to be in what’s called the “Disney bubble,” though in my case, it’s a time-saving and convenience thing, usually. For other folks, they recoil at the prices versus what they’d otherwise pay to stay off-site, and are driven more by the final price tag.

It really depends on what things are deal-breakers for you and what you value on your vacations. The off-property hotels around Disney World are usually cheaper from a cost perspective, though you give up other things for that price tag. If you’re considering staying off-property, here are the main reasons it might work out great for you:

The Disney-owned experience isn’t important to you

Many people use their hotel as a bed to fall into after being out all day. It doesn’t matter to them if the food options are numerous, if there’s ambiance, or if there’s anything Disney-related going on. If that’s the case, off-property won’t bother you. A lot of the hotels do the hospitality part well, but it will probably feel more like a generic hotel experience vs. a Disney-specific one. If you’re someone that likes to be out and about and active on your vacations, the hotel experience is probably a runner-up experience for you.

Also, when you’re adults going, you may be less into the cartoony stuff. You might be going for things like the Food and Wine Festival, avoiding characters like the plague, and just doing a few rides here and there. In those instances, having Disney theming around you might actually be a turn-off anyway. (Though their moderate/deluxe hotels feature that less.)

Most off-property hotels (including the Disney Springs hotels and the Swan and Dolphin) do not offer shuttles from the airport. The airport isn’t right next to Disney World – it’s about a 30-40 minute drive, which surprises a lot of people. But, some of you are going to other non-Disney parks anyway and are renting a car for the whole trip, so an airport shuttle isn’t part of your convenience equation.

Money is finite, and off-property hotels are generally very nice for less than a comparable Disney-owned hotel. Sometimes decisions come down to where you want to spend your money. Many folks would rather have a nicer dining experience, a larger booze budget, or a fun show instead of a pricier hotel room.

Obviously, Orlando is full of hotels to choose from! But, if you’re specifically going for Disney, there are off-property hotels with Disney perks. Off-property hotels tend to be cheaper per night than their Disney World counterparts, making it an easy choice for some. However, off-property hotels can carry hidden costs, and then there are other costs for parking when you drive in. I’d recommend popping your email in the form below to get our worksheet so you know the true, bottom line costs.

What are the drawbacks to staying off-property at Disney World?

If you don’t go with the Swan and Dolphin or a Disney Springs hotel, you miss out on quite a few perks.

Airport transportation:  As mentioned above, like any other off-property hotel, you won’t have a hotel shuttle, most likely. This means renting a car, or paying for a cab/Uber for the 30-40 minute drive (or longer, depending on traffic).  Specifically with Disney’s Magical Express, you also lose the convenience of just walking off the plane and starting your trip, leaving them to deal with the baggage. You’ll have to do the rental car line, lugging your stuff out, loading up, getting directions, sitting in traffic – you know, all that really sexy stuff.

No Extra Magic Hours: These additional hours are done at a park each day, and are open only to people staying on-property. The crowds are much thinner, making it easier to get on the rides you’d like and it’s also just generally a lot less chaotic.

No Disney Dining Plan: If you were looking for an all-inclusive-feeling vacation that has your food costs covered, you will also give that up staying off-property. The Dining Plan options Disney provides can only be booked as part of your hotel package with them.

FastPass+ Bookings: When staying on-property, you can book your FastPass+ choices 60 days out. This window shrinks to 30 days when you are off-property. This may not be a big deal for the easier rides to get, but the impact is more noticeable if you’re trying to get onto something competitive like Pandora (and, no doubt, Star Wars once it opens).

Paying for Parking: If you’re driving into the parks every day, you’ll pay for parking. (It ain’t cheap.) It’s also likely you’ll wind up paying for your parking at your hotel. These are some of the hidden fees I try and call out as often as possible so you know for sure what you’re actually saving. The parking fees especially can be sneaky little jerks that erode your wallet.

Resort Fees: Non-Disney hotels typically have a per-day “resort fee.” Some of them can get a little crazypants. For the off-site hotels we recommend, I’ve included the approximate per-day fees associated with each property so you don’t get surprised by the fine print. (Which seriously, who reads that stuff?)

Where do I recommend you stay off-property?

I would really encourage you to still consider hotels that have partnered with Disney – they’re running some perks that you will not get at other off-property locations.

For staying off-property, our #1 choice is the Swan and Dolphin for its convenience and perks you DO get, followed by your options at the Disney Springs hotels.

The Swan and Dolphin is actually on Disney World property, in the Epcot area. You can read our full write-up of why we love this one here. The Disney Springs area hotels that have partnered with Disney are the other one I’d encourage you to look at. Like the Swan and Dolphin, they get to take advantage of some perks that Disney property guests get. This can strike a great balance between those perks you’d normally give up by not being on -property and the reduced rates of being at a hotel that isn’t owned by Disney.